Sorted by newest to oldest. 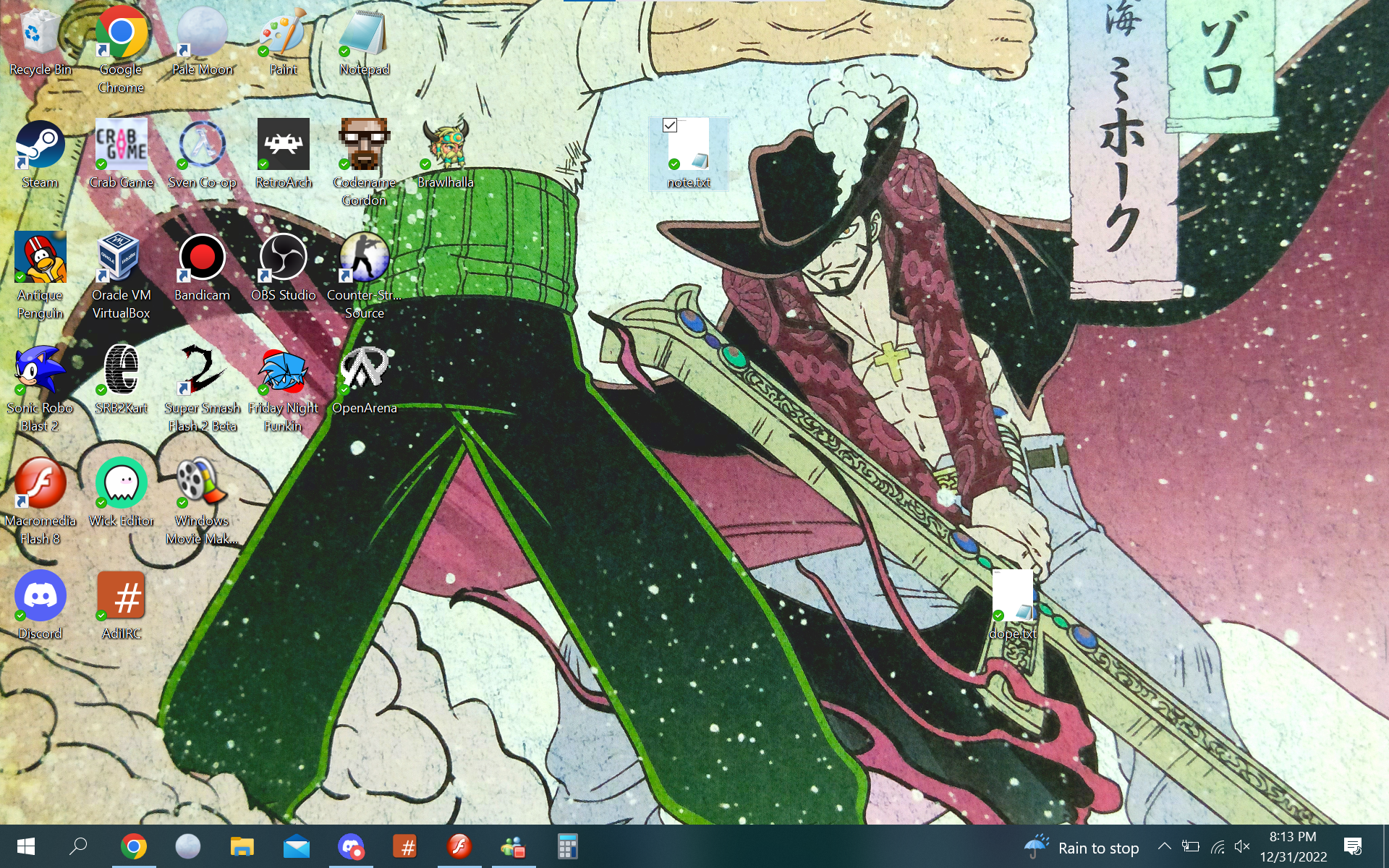 And its actually good only problem is that there's no usb port but it came with this short extension for usb's so eh.
I'm making a modern version of this website for reasons. On Monday, I'll reopen the RSS feed's back open.
And if I were to sum up this year in one word it would be: eh.
Dec 31, 2022 - 8:20:38pm (Reply-to)
It's not halloween Devasting isn't it. Anyways i hope you have a better halloween than i do, because i think i have school on that day.
I also realized i suck at writing. uh what else. OH YEAH, instead of me writing this i should be getting ready homecoming dance but guess what, i forgot to get tickets now i cant go. now im going to have to try explaining that to my mother. My dad is getting fries so thats something...
and yeah that's all i have for today i guess.
Oct 29, 2022 - 6:34:18pm (Reply-to)
1984 i gotta write a 700+ word essay thats due on my birthday and as im writing the
right click button on the touchpad stopped working (i'll probably wirte something about that), this is like george orewells book, 1984
Anyways i was told i was going to get laptop for my birthday, then i was told it would come after my birthday. but while i "wait" for it , i'll give myself a birthday present (i know that sounds sad, because it is).
Oct 4, 2022 - 8:24pm (Reply-to)
Sep 29, 2022 - 8:18pm
This website's design Hello again, today i'll be discussing what i'll do for the design of this website.
I don't like it too much, and i feel i want to change it but that'll take time.
This is mainly because of me having the stupid decision to make every game and video its own page which i regret doing.
One day I'll have A LOT of time to update the website's design so that it would look a cool 2000s site.
I also want to get the website to display properly in older browsers, my target is whatever browser works on Windows 2000 but for now K-Meleon will have to do.

Anyways heres a saul goodman gif you can hotlink.
And except a new video (to download) soon. ok bye


New things Greetings again viewers.
Once more I have added new things to this website instead improving. Why am i doing this? idk

Anyways today I finally release a page that has been in development for months: The Shockwave page.
Why am i seperating this from my main stuff? Flash is dead. That's why.
Why do i still use Flash, because i can.
Also if you haven't notice i tried making a theme switcher but is currently doesnt work for some reason.
I've also updated the homepage making it look bloated lol.

I figured out a way to reduce my space usage, (as im writing this I have used 66% of my storage) but the process is slow mainly because my dads laptop is slow.
Another thing I have created too is a RSS feed. Thanks to Denshi's video on RSS feeds, I now know how they work. They sure as hell weren't made for the way I post but eh
Oh yeah, I found the origin of this "bootleg" green sonic i saw on the play store:

It came from the 2009 Newgrounds Sonic collection page

Anyways that's all for now also visit Yoretude and subscribe to my RSS feed!

Anyways, since i'm about to start high school, here are a few things:
Tommorrow I'll be releasing a few new pages.
I'm going to open a program where you can beta test stuff i made.
This website now has PHP (that i cant seem to remove) and i may experiment with that.
Also, as i'm typing this, I don't have Half-life on my phone because i was trying to get garry's mod but failed miserably.
And found some cool things: I'm also working on 3 sub-sites here, mainly the portal.
So yeah that's all for now.
Aug 2, 2022 - 4:40pm (Reply-to)


Update (June 17, 2022) Hello again.
Despite my school chromebook being broken (join my discord to see a image),
I'm still updating this website. Recently I've been messing around with Macromedia Flash
(Version 4 mainly for some odd reason), and I'm making a few flashes to post on this website such as I'm also making a text-based RPG adventure game with FreeBASIC.
But I don't expect to ever finish that xd.
Anyways, that's also all the updates for today. There's WAY more things but it's 12am soo
bye
Jun 18, 2022 - 12:01pm (Reply-to)


Update (June 6, 2022) Greetings,
Despite me not posting for most of this year, I was very much active (check the activity log)
Although I was/am working on WAY too many things. which could explain that.
Anyways, here's a list of things I'm doing/will probably be doing:
Except A LOT more stuff here.
Before I finish, I HAVE A CUSTOM DOMAIN NOW!!!,
Also why do 2% of you want me to rewatch the AoStH "movie" along side the other movies.


I'm still alive somehow Happy (17 days late) New Year people
So I have inactive because of the new glitch update because the assets werent uploading but I figured out the issue. I wasnt using the Upload a asset button that was at the very top. It uploads to a new address but the old address works too :D.

Also I made this out of desperation:


THE NEW SONIC 2 MOVIE TRAILER! YES.
18 hours ago the Sonic movie trailer was launched at last
And I like it, you should watch it to.


The Sonic Frontiers trailer was launched yesterday so here's that too


Turkey (edited) Happy Thanksgiving!
It's been a long time since I last posted here.
Anyways I'm planning on releasing a new modification soon.
Also I added some new stuff here like a activity log and
scrolling text xd
Anyways gobble down your turkey and be thankful for whatever you like idk.


?... (edited) I am geniuley confused about the cdn's going down.
Anyways tommorow is my birthday and this site is getting a new layout tommorow so I might as well prepare.

edit (6:51pm):
thanks to the glitch forums I figured out how to bring images back but for some dumb reason the console isnt working. which is a major issue for the new layout.


School Well, its been quite while since i lasted updated this website
and a lot has changed.
I'm in 8th grade now.
I have a pc to use (it still isnt mine).
My site is on google :D
And more that im too lazy to address or something.
Tommorrow is school so see ya'll ig.


Untitled post 3 This is probably the last post before this website goes inactve due to the fact glitch on mobile is crappy and I don't have a pc.
Except a new game today or tommorow, anyways enjoy your summer.
June 14, 2021 - 4:04pm (Reply-to)


Untitled post 2 So school is almost over for the year,
but i still need to do some work for passing grades.
I've also gotten into doom modding so also expect a new mod.
And except a new game on my site soon.


New stuff So havent been updating my website because i've been to busy making srb2 mods (help me, im addicted).
So yeah dont except much until i finish my mods lol.
Also my site looks ugly on mobile so set it to desktop site.
Apr 25, 2021 - 7:32pm (Reply-to)


Scratch logging me out So this started yestarday i think when i was browsing scratch
on my account, when all of a sudden i was logged out.
So i logged back in and when i go to a few pages it will log me out again
idk why this is happening but someone
pls contact st (Scratch Team) about it.
also my scratch username can be found in the contacts page.
Apr 15, 2021 - 5:04pm (Reply-to)


Few new things (edited) So first off my phone wont charge so im using my school chromebook
Second i revived the 2nd chat: here
And i go by Webgame2k now but you can still call me CoolKA2277 idc.
i wont be on discord currently so join my dead fourms.
Apr 14, 2021 - 11:57am (Reply-to)